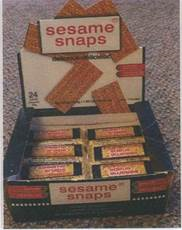 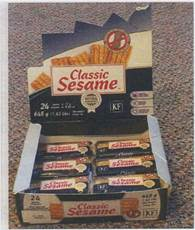 Werocy named the new corporation K-Max (2013) Corporation (“K-Max”). [1] Werocy also partnered with another former distributor of Sesame Snaps®, James Picard, who ran Exclusive Candy and Novelty Distributing Limited (“Exclusive”). [10] K-Max began selling Classic Sesame™ directly to its former customers of Sesame Snaps®. [17] Some customers asked about the change in brand, but others did not seem to notice. [17]

When the final order from the 2012 infringement case was issued in 2015, the Court also added K-Max and Exclusive to the injunction.

K-Max and Exclusive (the “Moving Parties”) objected to being named in the injunction since they were never a party to the initial infringement suit. The crux of their argument was that if they were not party to the initial litigation, the injunction could not be awarded against them. They sought to set aside the injunction, [20] but also took the opportunity to argue, in their own right, that the Classic Sesame™ that they were selling (and particularly the packaging) did not in fact infringe the trade-marks or copyright of Sesame Snaps®. [8]

Trade-mark Infringement and Passing Off

On the issue of trade-mark infringement and passing off, the Moving Parties argued that the previous judge erred when he concluded there would be confusion between the two products since there was no expert evidence on which he could rely. [29] The Court, however, disagreed, and held that the judge was properly situated to make the analysis on his own. He rightly considered whether, as a first impression, if the casual consumer would likely be confused, [31] without the need for expert evidence. [33] The Court also rejected the Moving Parties’ insistence that Agros should have provided survey evidence. The Court expressed considerable doubt as to how helpful such evidence would be, going so far as to say that survey evidence may well have served to confuse the judge, rather than assist him. [37]

The Court then conducted its own comparison between the two products’ packaging and agreed that the two products were confusingly similar. [38] In fact, considering all the evidence, the Court thought it clear that the Moving Parties “went out of their way to find a product that would sow confusion in the mind of the consuming public, and that they succeeded in this task”. [42] The Court upheld the injunction against K-Max and Exclusive. [61]

In the initial infringement case, the Classic Sesame™ packaging was also found to be infringing the copyright of the Sesame Snaps® packaging. The Moving Parties attempted to run another procedural defence, by arguing that Agros, as a Polish corporation, could not assert its copyright in Canada. [44] This argument was rejected. Poland is a treaty country to the Berne Convention and therefore can enforce its copyright in Canada. [44-47]

In one sense, this case is a classic passing off case. The Court’s comments about the lack of the requirement for expert evidence or survey evidence is consistent with the growing acknowledgment among Courts that such evidence is often not very helpful in trade-mark infringement and passing off cases.

In another sense, this case serves as a telling example of the power of intellectual property to protect your business, even where an infringer seeks to avoid the Courts with corporate tricks. The new corporations that carried on selling the infringing products were included in the injunction, even though they were not initially served with a statement of claim, by virtue of Werocy and Picard’s knowledge of the initial litigation.