Owners of industrial design registrations in an industry already crowded with industrial design registrations may face greater difficulty when arguing infringement. The more crowded the field, the smaller the degree of difference required to evade the protection afforded by existing registrations. In this case, the Federal Court (“FC”) found that although the Plaintiff’s Canadian Industrial Design No. 133964 (“ID 964”) was valid, the Defendant did not infringe it. [3]

The design consists of the features of shape, configuration, pattern and ornament of the entire helmet face field as shown in the drawings. [8] 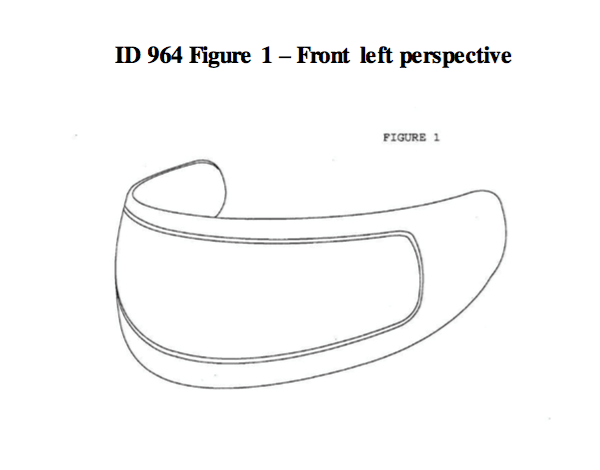 The HJ-17L Face Shield: The Alleged Infringing DesignDiner J. of the FC described the viewing area as “rectangular with rounded corners and rounding at the top with tapered end. The height of the viewing area retreats along the arms.” [10] AFX, during the trial, emphasized the “outwardly moulded projection and the smooth contoured surface around the viewing area”. [11] The Helmet Face Shield was also disclosed in AFX’s patent application, which was abandoned after a protest was filed. AFX was successful, however, in registering the industrial design application. [19]

The HJ-17L is manufactured by HJC Korea and marketed by HJC America (“HJC”). It is a dual lens helmet face shield, which, like ID 964, contains a raised lens viewing area. [12] 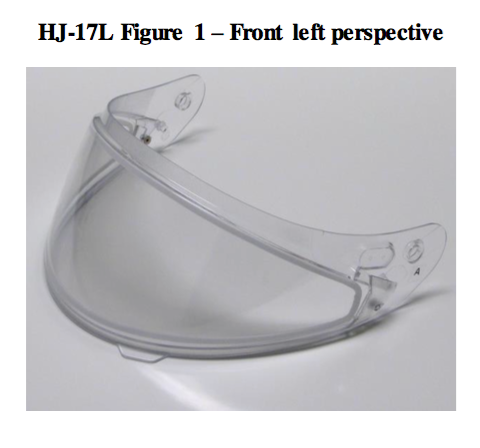 The issues to be decided in this case were whether the HJ-17L infringes ID 964, whether ID 964 is valid, and whether AFX has violated subsection 7(d) of the Trade-Marks Act in misrepresenting ID 964 as valid. [13] A preliminary issue argued by HJC was that, as a marketing arm, it does not make, import, sell, rent, or offer or expose for sale or rent the HJ-17L face shield, which are the activities prohibited by section 11 of the Industrial Design Act. [52] However, since the FC did not find that the HJ-17L face shields infringe ID 964, it did not address this issue. [54]

There are four steps required to determine infringement of an industrial design: (1) an examination of the prior art, (2) an assessment of utilitarian function and any methods or principles of manufacture or construction, (3) an analysis of the scope of protection outlined in the language and figures of the registered design itself, and (4) in light of all of the above, a comparative analysis of the registered design and the allegedly infringing product. [55]

The FC first reviewed various examples of prior art provided by HJC and then proceeded to the second step of the infringement analysis. Unlike the patent regime, which protects functionality, section 5.1 of the Industrial Design Act states that a registered industrial design does not protect features whose form is dictated solely by utilitarian function or stem solely from methods and principles of manufacture or construction. [57] While the FC determined that ID 964 could not protect the purely utilitarian elements of a double-walled anti-fogging face shield, it found that it could protect the way those elements were expressed, provided it involved an original “shape, configuration, pattern or ornament”.  [79] The “outwardly moulded projection and the smooth contoured surface around the viewing area” of the face shield was determined to be a protectable aesthetic design element.

In assessing the scope of protection of ID 964, the FC disagreed with AFX that it was limited to the “outwardly moulded projection and the smooth contoured surface around the viewing area” for numerous reasons. [80] Firstly, nothing within ID 964 suggests that protection was limited to this element. [81] Secondly, AFX, in its oral submissions, stated that certain elements were excluded from the registration because they were purely utilitarian and as such could not be protected. The FC found it reasonable to assume that anything included in the design was intended to be protected. [84] Finally, the FC noted that the Canadian Intellectual Property Office suggests that applicants indicate whether protection is sought for only part of a design, which AFX did not do. [85] The FC concluded that the entire shield was included in the industrial design protection.

On reaching the final step of the infringement analysis, the FC noted that since the Helmet Face Shield was situated in a crowded field, the degree of difference required for a newer design to evade the protection afforded by ID 964 is small. [87] It was also noted that because face shield design is contingent on helmet design, the designer’s scope to introduce ‘sparks of originality’ is diminished. [99] Given that the entire design is covered by ID 964, the FC found numerous differences that were sufficient to conclude that an informed consumer would conclude there are significant differences between ID 964 an HJ-17L, and as such, there was no infringement. [100]

The test for determining validity, as stated by the FC, is that a registrable design (i) must differ substantially from the prior art (originality), (ii) cannot closely resemble any registered designs, and (iii) cannot have been published more than a year before application for registration. [110] Upon completing its analysis, the FC found that there was a sufficient degree of originality and, contrary to the arguments of HJC, ID 964 was not invalid on the ground of utility. [118, 122] Finally, as ID 964 was found to be valid, the FC determined that HJC’s allegation that AFX breached subsection 7(d) of the Trade-Marks Act was moot.