The Ontario Superior Court of Justice (“the ONSC”) was called upon to perform US patent claim construction to decide whether a United States patent (U.S. Patent No. 5,630,715) owned by OrthoArm Incorporated (“OrthoArm”) covered certain dental products sold by a licensee, GAC International (“GAC”). OrthoArm had originally licensed the ‘715 Patent to GAC for the sale of a OrthoArm’s self-ligating orthodontic bracket, [14] but GAC acquired new technology that it contended puts its new product outside the scope of the earlier patent and licensing agreement. [17] OrthoArm disagreed, arguing that the new technology was still covered by ‘715 Patent. [19] 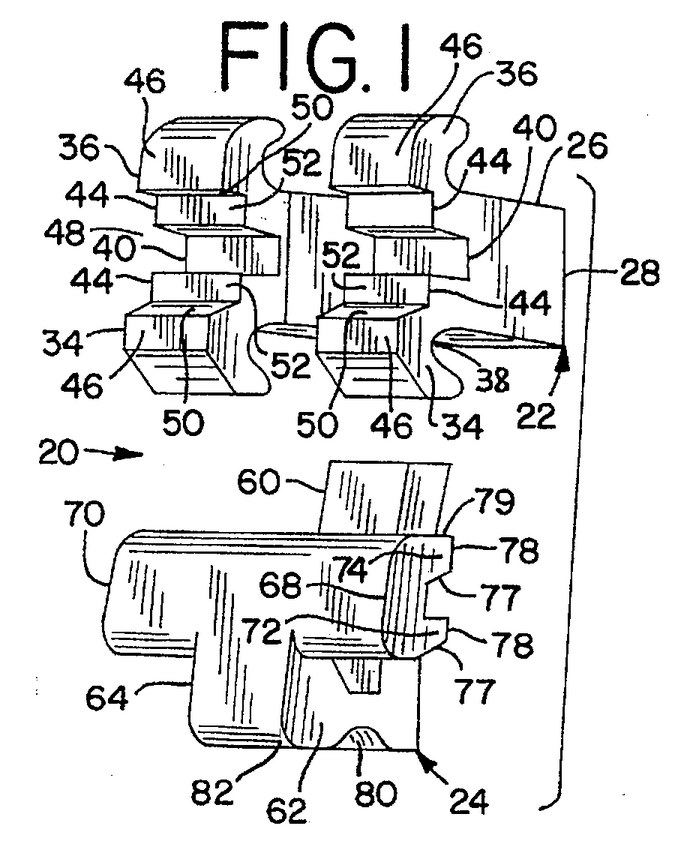 In order to decide the case, the ONSC had to determine certain matters of US Patent law as fact through expert witnesses. The two experts, Marguerite Ethier and Lawrence Goodwin, agreed on the relevant US patent law principles, but disagreed on the proper construction of the ‘715 Patent and whether GAC’s new product infringes. [22] Ultimately, the Court determined that GAC’s new product did not fall within the claims of the ‘715 Patent and was therefore not subject to the OrthoArm-GAC license. [70]

US Law on Patent Infringement

Construction of the ‘715 Patent

At issue was the interpretation of four key terms in the ‘715 Patent. [41] The ONSC’s analysis of the meaning of two of these terms exemplifies the ONSC’s approach to claim construction.

The first key term was a directional term. Claim 29 claimed a bracket with a base having an “occlusal-gingivally extending opening”. [42] It was agreed that occlusal was understood to refer to the direction toward the mouth opening, and gingivally was understood to mean toward the gums. [44] Assuming the patient was sitting upright, these terms meant generally up and down. [44] What the ONSC needed to determine was whether claim 29 required the base to have an opening that is absolutely up or down, or whether it allowed for some degree of variance in the direction of the opening. [46]

The ONSC considered the figures in the specification, which showed some variance in the orientation of the opening, [47] the lack of limiting terminology in the specification, [48] the expert testimony that people’s teeth sit in the mouth at different angles, [49] and considered the suffix “-ly” on “gingivally” to imply a more general requirement, [49] all to determine that the “occlusal-gingivally” directional requirement did allow for some variance. [47-50] Although the ONSC did not say explicitly that the person skilled in the art would interpret these terms in this way, it did acknowledge that the experts that it relied on had skill in the art. [38]

A second key term is another directional term. Claim 1 claimed “a slidable locking shutter moveable between open and closed positions”. [56] The ONSC needed to determine whether the movement between open and closed positions needed to be be entirely a sliding motion or whether the claim could capture a motion that includes some rotation as well. [58, 61]

(iv)            the ordinary and customary meaning is the meaning that the term would have to a person of ordinary skill in the art in question at the time of the invention;

(v)               in some cases, the ordinary meaning of claim language as readily understood by a person of skill in the art may be readily apparent even to lay judges, and claim construction in those cases involves little more than the application of the widely accepted meaning of commonly understood words; … [emphasis added]

Since all of the claims of the ‘715 Patent include this claim element, GAC’s new products do not infringe the ‘715 Patent and therefore are not be covered by the OrthoArm-GAC license. [64, 70]

An Ontario court doing an infringement analysis on a US patent is a rare occurrence. Foreign law is a question of fact, so the ONSC’s interpretation of US law is of limited persuasive value. However, this case still serves as a useful example of how a Canadian court that does not normally deal with patent law in Canada interprets American patent law.