Sometimes the essence of an invention is in its simplicity. However, as this case demonstrates, although the simplicity of a product may be attractive from a marketing perspective, it makes for an easy rejection of the patent application for obviousness. In this case, the Patent Appeal Board (“PAB”) rejected the sports training aid disclosed in Canadian Patent Application No. 2,645,815, (“the ‘815 Application”), entitled “Portable Adjustable Durable Suspended Soccer Goal Target” for obviousness, improperly including new matter, and indefiniteness. [1, 56]

The ‘815 Application describes a soccer training target that is adapted to be positioned in a soccer goal. The target is a rectangular frame  suspended by adjustable fastening straps. The frame defines a small opening through which a soccer ball may be directed. [2] 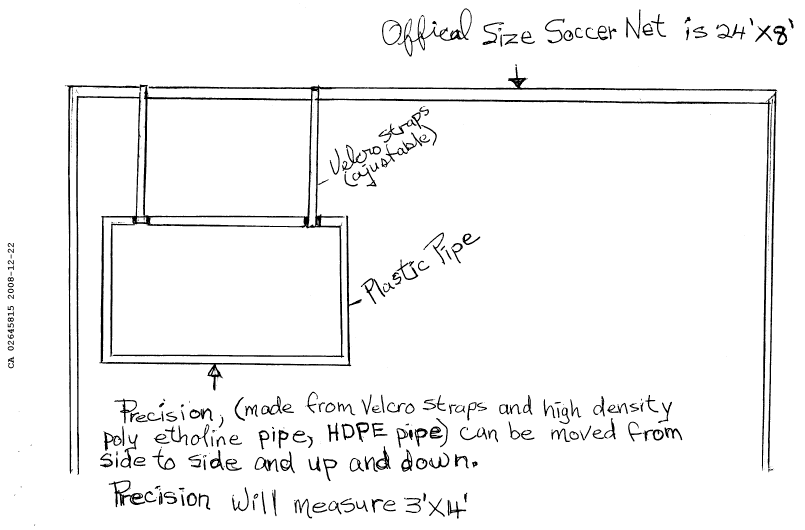 Anticipation: Subject Matter Not Disclosed in a Single Prior Disclosure

In order to determine whether the claims of the application were anticipated, the PAB referenced the test for novelty articulated by the Supreme Court of Canada (“SCC”) in Apotex Inc v Sanofi-Synthelabo Canada Inc. [14] This test requires answering two questions:

The PAB answered the first question in the negative as all of the essential elements could not be found within a single prior art reference, and therefore the claims were not anticipated. [31-33]

Obviousness: All Essential Elements Found Within Two Prior Arts

The PAB reviewed three prior art references to determine whether the claimed invention would be obvious to a person skilled in the art, who was described as a designer of sports training aids. [22]

One of the prior art references contained all of the essential elements of the claimed invention with one exception. Rather than disclosing pieces of material assembled into a frame through which a ball could be shot, the prior art disclosed a solid target. [40] The other two prior art references both disclosed a frame as part of a training aid, but do not disclose adjustable straps for hanging the frame. [38, 39] Nevertheless, the PAB found that a person skilled in the art would find it obvious to combine these prior art references, arriving at a training aid with a hanging frame as a target. [44] In coming to this conclusion, the PAB noted that although something cannot be considered obvious merely because of its simplicity, it can still be deemed obvious based on the combination of prior art. [48]

The Final Action for this application found three features to be new matter that could not be reasonably inferred from the originally-filed specification. [50] Upon the PAB’s review, they concluded that two of such features constituted new matter that contravenes section 38.2 of the Patent Act. [51, 53] First, there was no suggestion in the original specification and drawings that the straps of the claimed invention are loosely attached to the frame. [51] Second, there was no suggestion that the straps could be used on any side of the frame. [53] The PAB found that the third feature in question, that the straps are seven feet in length, could be reasonably inferred from the originally-filed specification and drawings. Based on the standard size of soccer goal, the skilled person would appreciate that a strap length of seven feet would allow the target to be located at ground level. [54]

Indefiniteness: Claims Are Not Clear and Precise

Upon review of the claims in the patent application, the PAB agreed that they are not clear and precise for the reasons provided in the Final Action and, accordingly, do not comply with section 27(4) of the Patent Act. [55]