While commercial success can sometimes be good evidence of inventive ingenuity, patent applicants should be wary of relying solely on such evidence to avoid rejection on the grounds of obviousness, as factors such as marketing may be found to be the actual reason for the success. In this case, the Patent Appeal Board (“PAB”) rejected the film dispensing cassette disclosed in Canadian Patent Application No. 2,726, 926, (“the ‘926 Application”), entitled “Film-Dispensing Cassette and Rimmed Bag for Waste-Disposal Unit” for obviousness and lack of novelty. [4]

The ‘926 Application describes a film dispensing cassette used in waste-disposal units, which are typically used in the disposal of waste such as diapers and animal litter. [2] The cassette is placed around the top edge of a waste-disposal unit and has a tubular film packed within it. Film is dispensed from the outer edge of the cassette and is fed from the cassette in a continuous tube. A knot can be tied at the free end of the film to create the enclosed base of the bag. As waste is fed into the center of the film cassette, it causes more film to be drawn from the cassette’s outer edge. [2] 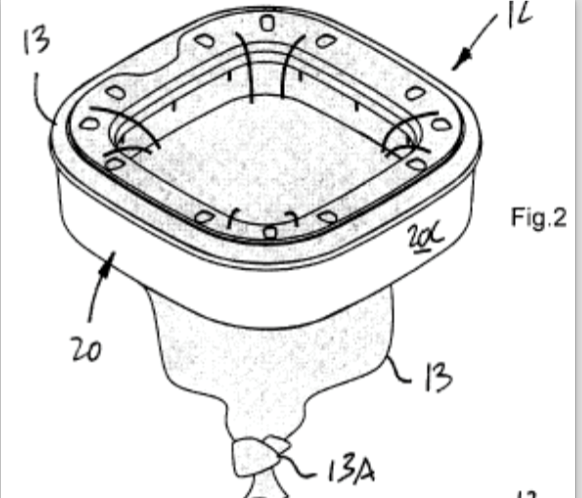 As can be seen in the above figure, the shape of the cassette is a rounded square, or “squircle”. This shape is the focus of the application. The ‘926 Application claims this shape increases the amount of film that can be stored in the cassette without requiring a drastic increase in the lateral dimensions, making it compatible with existing waste-disposal units. [3]

In their analysis of the first step of the test, the PAB found that claims 1-4 and 12 were disclosed by a piece of prior art. [54] The applicant contended that this prior art only disclosed a circular opening. However, in the PAB’s view, the skilled person would understand the passage “other shapes such as squares, rectangles, ovals and the like” to mean these shapes are explicitly disclosed as an alternate shape. [48, 51] On proceeding to the second step of the test, it was found that in light of the drawings and description within the prior art, a skilled person would have been able to make a film cassette having the essential features of claims 1-4 and 12 without undue burden. [55] As both steps of the novelty test were answered in the affirmative, it was concluded that these five claims were anticipated.

Upon applying the test for obviousness, also articulated in Sanofi, the discussion once again revolved around the shape of the claimed invention. The applicant contended that in order to arrive at a square-shaped film cassette based on the prior art, a skilled person must perform ‘mental gymnastics’. [60] The PAB, however, felt that a skilled person would understand from the prior art that a variety of shapes, including a square, were equally viable and that the disclosure was not limited only to a circular embodiment. [61] Additionally, while the applicant argued that the prior art was limited to a tubular central portion, the PAB believed the skilled person would not take the word tubular to mean only circular or oval cross-sections and that a square cross-section could be considered tubular.

A final argument that was made by the applicant was that the commercial success of the product was indicative of the “uniqueness of the claimed invention, and of the unexpected advantages provided by the recited shape of its central opening.” This argument was rejected. The PAB noted that commercial success may in some cases support inventive ingenuity, but in the case at hand, the sales figures alone did not demonstrate that the commercial success wasn’t due to other factors such as marketing. [23, 70] It was concluded that all claims of the invention were found to lack inventive ingenuity and as such, were obvious.